ray creates a ray-traced image of the current frame.

This command is used to make high-resolution photos fit for publication and formal movies. Please note, the ray command can take some time (up to several minutes, depending on image complexity and size).

For those who are making movies with PyMOL, Ray is one of the most commonly used last steps before stitching the frames together to compile the movie. Ray has many powerful features such as setting the size of the image -- and it still works even if the Viewport or screen is smaller than the requested output file dimensions.

angle and shift can be used to generate matched stereo pairs

Setting the Ray_trace_mode variable in PyMOL changes the way PyMOL's internal renderer represents proteins in the final output. New modes were recently added to give the user more options of molecular representation. New modes are: normal rendering, but with a black outline (nice for presentations); black and white only; quantized color with black outline (also, very nice for presentations; more of a cartoony appearance).

Note: Mode 3, the quantized color one, sort of burns the background if you're using this setting. This will make a pure white background somewhat "offwhite"; thus, a poster would look poor because you could see the border for the image. If you'll be using this mode, try the ray_opaque_background setting.

Here are the example images for the new modes

PyMol 0.97 and prior used orthoscopic rendering -- that is, no perspective. Upon the arrival of 0.98 and later, we get perspective based rendering at a cost of a 4x decrease in render speed. If you want perspective

To magnify the effect of perspective on the scene,

renderer = -1 is default (use value in ray_default_renderer)

renderer = 1 uses PovRay's renderer. This is Unix-only and you must have "povray" in your path. It utilizes two temporary files: "tmp_pymol.pov" and "tmp_pymol.png". Also works on Mac via Povray37UnofficialMacCmd but it needs to be in your path as "povray".

As an example of the efficacy of this method, I ray traced a rather complex scene with all the atoms visible here's the output of ray:

and here is the result when I soft-clipped everything else using the above method:

The two images in the following gallery show the results of the rendering.

If memory is an issue for you in PyMOL, try executing your rendering from a script rather than a PyMOL session file. An unfortunate unavoidable consequence of the fact that we use Python's portable, platform-independent "pickle" machinery for PyMOL session files. Packing or unpacking a Session or Scene file thus requires that there be two simultanous copies of the information to reside in RAM simultaneously: one native and a second in Python itself.

So when memory is a limiting factor, scripts are recommended over sessions. 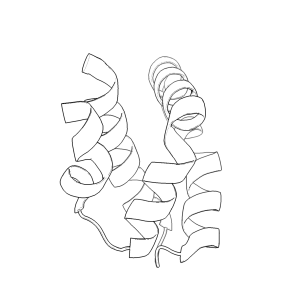 How do I ray trace a publication-ready (~300dpi) image using PyMol?
This answer is in the Advanced Issues (Image Manipulation Section).