A dehydron is a protein backbone hydrogen bond incompletely shielded from water attack. A desolvated hydrogen bond is energetically more favourable than one exposed to the solvent and hence dehydrons are sticky , since they promote the removal of surrounding water through protein associations or ligand binding.

Dehydrons are less conserved than other structural motifs, hence identification of dehydrons could help to increase specificity during the rational drug design process. Certain proteins are enriched in dehydrons such as membrane proteins, toxic proteins and proteins that have a strong tendency to aggregate. Dehydrons have been invoked to explain biological processes above the molecular level such as the dosage imbalance effect in duplicated genes and the high connectivity of the protein interactomes of higher organisms.

This plugin have not been tested on a Mac OsX machine, but it should work.

The plugin can be accessed using the following command: 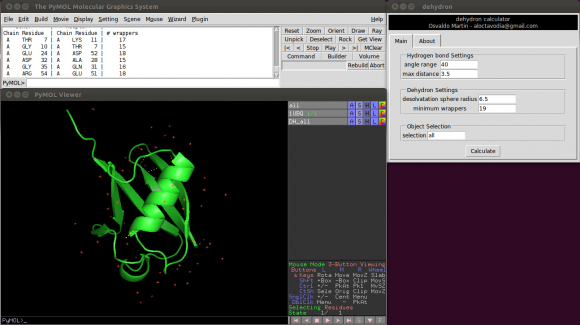 There are five parameters the user can change:

Two of them control the hydrogen bonds detection.

Another two control the dehydron detection.

A wrapper is defined as a carbon atom not bonded directly to an oxygen or nitrogen atom, i.e. a non-polar carbon atom. The plug-in count as wrappers any non-polar carbon from any protein chain, organic ligand or other type of molecule, if the atoms belong "selection" (see below). This means that if you have, for example, a dimeric protein you will probably get different results for the dimer and for the isolated monomers. Instead, if you upload two (or more) different files the results will be independent because the plug-in does not count atoms from other objects

Figure 1:Histogram of the number of wrappers per hydrogen bond (blue bars), the distribution of wrappers approximate a Gaussian distribution (red line). Parameters for the Gaussian fit (mean and standard deviation)are show in the grey box

An analysis of 7476 high quality X-ray proteins was performed in order to estimate the number of wrappers that should be used as a cut-off to determine whether to call an hydrogen bond a dehydron (i.e. the min wrappers parameter). Although this value have been already estimated in the literature; differences in the algorithms used before and the ones used by wrappy could lead to differences in the exact value of the cut-off and hence this parameter was re-estimated in order to obtain reliable calculation of the dehydrons. To compute the numbers of wrappers the following parameters were used angle range = 40°, Max distance = 3.5 Å and desolvatation sphere = 6.5 Å. A non-redundant set of 7476 proteins were obtained from the Protein Data Bank. Each protein in this set conforms with the following criteria: Resolution < 2.0 Å, R-factors <= 0.25, not containing DNA and/or RNA molecules. Additionally, proteins with a sequence identity of 30% were removed. The frequency of wrappers in this set of proteins approximate a Gaussian distribution (see figure 1) with a mean of ~27 and a standard deviation of ~8, hence an hydrogen bond with less than 19 wrappers is defined as a dehydron (27-8 = 19). In the same fashion and over-wrapped hydrogen bond is and hydrogen bond with more than 35 wrappers (27+8).

The H-bond detection code is based on the list_mc_hbonds.py script from Robert L. Campbell http://pldserver1.biochem.queensu.ca/~rlc/work/pymol/

All features in this version and most of the code was provided by Thomas Holder, thanks Thomas! :-)

Thanks Shafqat Rasool for reporting the bug.

Fernández, A. and Berry, R. S. (2003). Proteins with h-bond packing defects are highly interactive with lipid bilayers: Implications for amyloidogenesis. Proceedings of the National Academy of Sciences, 100(5), 2391–2396.

Fernández, A., Scott, R., and Berry, R. S. (2004b). The nonconserved wrapping of conserved protein folds reveals a trend toward increasing connectivity in proteomic networks. Proceedings of the National Academy of Sciences of the United States of America, 101(9), 28232827.