APBS, the Adaptive Poisson-Boltzmann Solver, is a freely available macromolecular electrostatics calculation program released under a BSD license. PyMOL can display the results of the calculations as an electrostatic potential molecular surface.

Both plugins make it possible to run APBS from within PyMOL, and then display the results as a color-coded electrostatic surface (units

) in the molecular display window (as with the image to the right).

After all components are installed, open the plugin and browse for apbs and pdb2pqr on the "Program Locations" tab (if they haven't been found automatically). 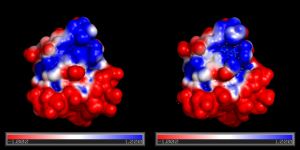 PyMOL visualizing two maps at once